New Beginnings.....Turning away from Epypt, looking ahead to the promised land.


Having had a break for the summer ( that long wet thing with a couple of baking hot days chucked in for good measure), I am now in the throws of preparing for a new school year.
I have had some what of a simplification in terms of curriculum. Over the last year we have skipped about  and dabbled in all sorts of methods and materials, and it has left me feeling some what 'over wrought' there are so many 'good' materials, curriculums, plans etc I end up feeling like I have to do them all or else we'll be missing out, but in trying to encapsulate it all we do little of any! I also found my original 'vision' for the boys home schooling was slowly being lost and sacrificed to these 'ways that seem right',


There is a way which seemeth right unto a man, but the end thereof are the ways of death. Proverbs 14:12

So after a break from the school mindset, and a crying out to God, My answer came as I read my 2yo his bedtime story from the lions story teller bible. I read the story of Gideon. He came before the Lord with his thousands of men ready for battle, and God said to him (remember this is a childs bible!),

"Gideon, you have far too many men, send some away.""There are more Midianites than I can count!" Gideon stammered. "I need all the help I can get.".... God answers, "I am all the help you need". (After purging the troops twice, Gideon is left with 300 men against the thousands of the Midianite army.)'But, how can we win?" stammers Gideon, "You can't," God said,"Not without my help. And that's what I want you to see. Here's my plan...."


As I read that, it was like God speaking into my heart.
"You have too much, get rid of some,  you can't do it on your own, seek my way."

As I dwelt on that the next day, different quotes came to mind, like,
"God can do little with much, much with little and everything with nothing."
"Your children shall be taught of the Lord." Isaiah 54:13
"Don't despise small beginnings"
"My thoughts are not your thoughts, neither are your ways my ways, saith the LORD." Isaiah 55:8
"The wisdom of this world is foolishness with God." 1 Cor 3 :19
"But God hath chosen the foolish things of the world to confound the wise; and God hath chosen the weak things of the world to confound the things which are mighty;" 1 Cor 1:27.

If Gideon had fought with his army of thousands, the people would have boasted in Gideon and themselves, but this way, God revealed himself to his people - mighty to save, He got the glory, the people got to see Gods loving protection, and mighty power working on their behalf. Little is much with God - look at the loaves and fishes that fed the five thousand.

Ok Lord, I'm thinking, but  I NEED this stuff else I can't do the job. (So full of faith aren't I! Just like Gideon said, "but Lord I need all the help I can get!")

The following day, we are on one of our canal walks with a friend and her 2 children, the big children (my 2 boys and my friends daughter) are throwing stones and rocks at a branch that has got stuck in the middle of the canal, they are trying to free it to watch it float down the canal, some time  and some huge rocks later, it hasn't budged. Along comes my 2 yo with a little stone in his hands and on his very first throw, the little stone bounces off the branch, and half a second later the branch drops a bit and then floats off down stream. My friend and I both cheered, my 2yo looked very pleased, and I said to my friend,  "after all those big rocks, splashes and attempts by the big children,  it just took that little stone in the hands of Smith!" and that's when I remembered, Gideon, and it was like God was saying "Exactly!" "what seems like little, or insufficient isn't when I'm involved." and the scripture came to mind too about having the faith of a little child....

And one more witness of confirmation - as if  I needed it! The 'Raising Olives' blog that I like to read, sent a post to my e-mail entitled 'pursuing academic wood, hay and stubble' (click the link to have a look - it's well worth the time). The title says it all.

For other foundation can no man lay than that is laid, which is Jesus Christ.
Now if any man build upon this foundation gold, silver, precious stones, wood, hay, stubble;
Every man's work shall be made manifest: for the day shall declare it, because it shall be revealed by fire; and the fire shall try every man's work of what sort it is. ! Cor 3:11-13 (again!)

So After all this and some struggling on my part to relinquish my 'crutches' of what I thought was the best  - I feel God has led me to use something  which does not have all the bells and whistles but there is a sense of freedom and excitement in the simplicity.

I will be posting on specifics soon enough as it all takes shape.It's exciting and freeing when you just accept the fact that looking back to Egypt for the way to live in the promised land is bondage, not freedom. More than that - it is lack of Faith in the God who has brought us so far. I am not saying that all the materials I tried beforehand (which were all Christian) are wrong (they are still on the shelf as research tools for the children if they should be needed), just that they were wrong for me - because of how I was using them  in my old  school 'egyptian' mindset. So we are on a journey of faith, being led (hopefully!) by the Lord into our 'promised land' of the home school God designed for us.

How about you?
Do you still find yourself looking back to Egypts standards and ways?
Or is your mind a lot more renewed than mine!?!
Thank God he is a God of Grace - but also loves us so much He is prepared to discipline us when we need it - to keep us close to Him.

I love you Lord!.I Believe, help my unbelief.

Email ThisBlogThis!Share to TwitterShare to FacebookShare to Pinterest
Labels: A word in season, Home Schooling

You are welcome to comment or ask a question. If you disagree with anything I have posted you are welcome to say so but please keep your comments polite or they will be removed. Also bear in mind - what i post is my opinions, beliefs, experiences and understanding, I am entitled to them just as you are to yours, so please respect that. So.....on you go then!......x

"These words shall be in your heart: And you shall teach them diligently to your children, and shall talk of them when you sit in your house, and when you walk by the way, and when you lie down and when you rise up." 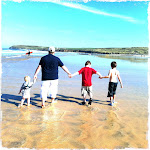